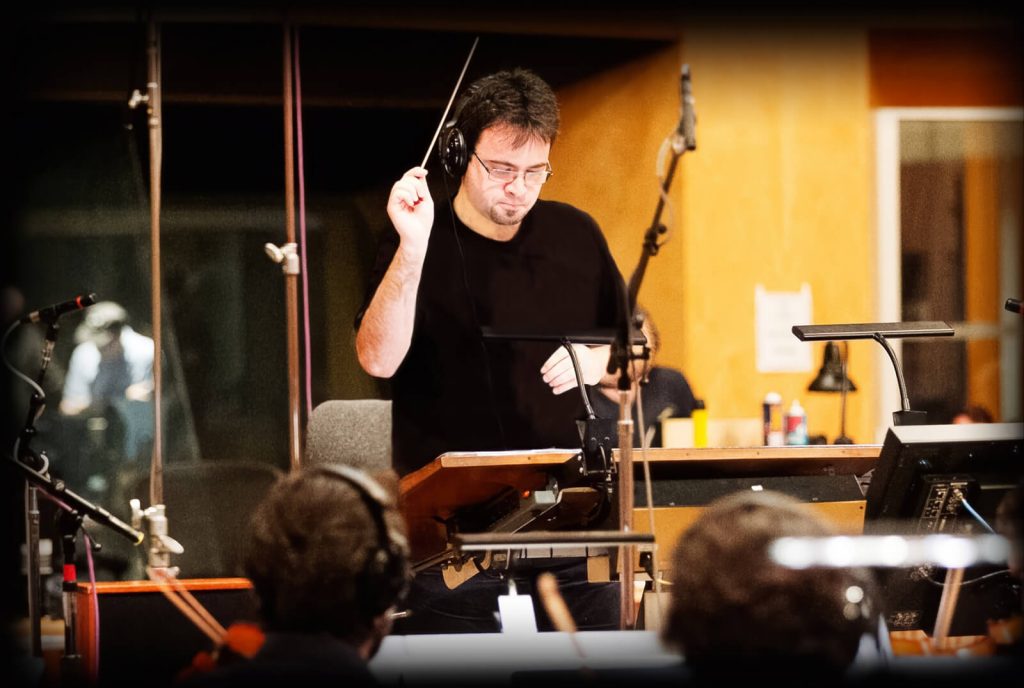 Antonio Di Iorio is a music composer for Film, any kind of media and classical concerts. He is an orchestrator, conductor and pianist as well.

Los Angeles based, besides being busy on his projects and awarded movies like Wings Over Washington, Il Viaggio, Jacks, Life In Between, Spirito Eroico (for the Olympic Games in Vancouver 2010) and others, Di Iorio heavily worked alongside film composer Tom Holkenborg (aka Junkie XL) as an additional composer and executive senior assistant for 4 years in Los Angeles.

His music can be massively heard in movies like:

He recently began collaborating as an additional composer for renowned Hollywood composer Pinar Toprak (Captain Marvel, Krypton, Stargirl).
His music can be heard in:
The Lost City (Paramount Pictures) by Aaron Nee and Adam Nee,
and others that are going to be released soon (more updates soon). 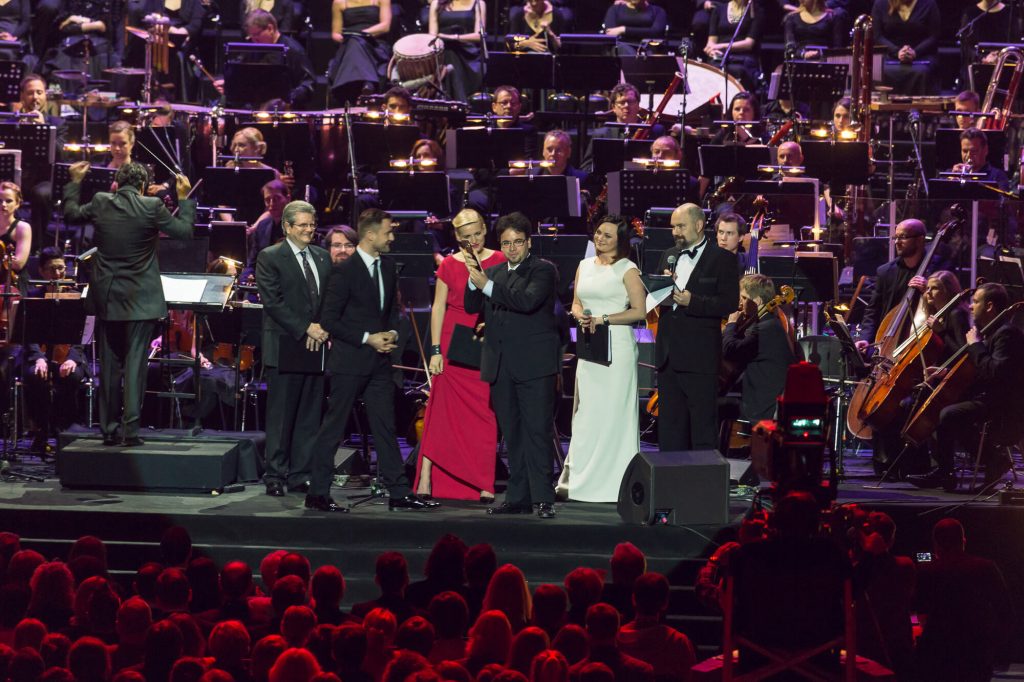 Born in Campobasso, Italy, he graduated at the Conservatory “Lorenzo Perosi” in Campobasso in Piano (2005) and Composition (2007) with top grades with honours, studying with Piero Niro and also with Luca Salvatori, orchestrator of film music composer Andrea Guerra.

In September 2011 he moved to the USA to attend the one year Master Of Music In Film Composition – Pacific Northwest Film Scoring Program in Seattle, Washington, at the “Seattle Film Institute”, getting the Master Degree with top grades. Among teachers, he studied with the two-time “Emmy Award” winning Hummie Mann, composer of several film music scores and orchestrator and conductor working alongside many important film composers in Hollywood.

While he was in Seattle, Di Iorio composed music for various movies and a documentary, recording and conducting by himself in different recording studios: Spacecraft Escape, Marilyn’s Dress, Cane and many others.

Since 2005 he has co-worked with Composer and Orchestra Conductor Flavio Emilio Scogna (who was the personal collaborator of Luciano Berio). He made the music reconstruction of Serenata Per Un Satellite by Bruno Maderna, an elaboration and arrangement (ordered by ACLI) for Voice and String Orchestra of Quanto T’Ho Amato, original by Nicola Piovani, performed in Rome by The Nova Amadeus Orchestra, broadcasted live in World Vision by CTV and Radio Vaticana (2005), and some recordings like Stabat Mater by Giovanni Battista Pergolesi and The Viola In My Life by Morton Feldman.

Since 2005 he has worked as orchestrator, arranger and conductor with Silvio Amato, a TV, classical and theatrical music composer in Milan. Di Iorio made the orchestration of Faraway Flares (Bagliori Lontani), performed and recorded by the Monesis Ensemble in Rome (2005). Then he made the orchestrations for orchestra of three Ballets (each one in 2 Acts and 2 hours long), performed in the United Kingdom and Ireland: Snow White (2005), recorded by The Timisoara National Orchestra, in Romania, conducted by Scogna; Peter Pan (2006), conducted by Di Iorio and Scogna; Beauty And The Beast (2007), arranged, orchestrated and conducted by Di Iorio. He orchestrated and revised also Amato’s Il Principe Felice, recorded by the Ensemble Strumentale Scaligero, from La Scala in Milan, for La Feltrinelli and Curci and performed in Russia on All works released on CD as well. 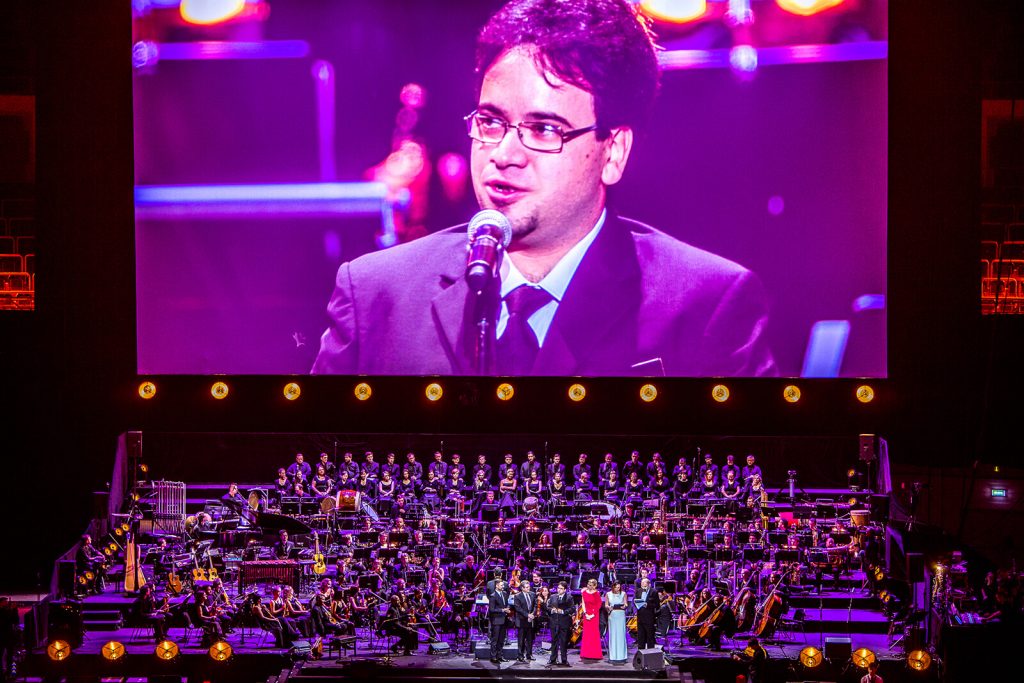 Di Iorio attends also several classical and film music competitions. In 2008 he was selected in the competition “Quartetto Uscita Firenze Sud”, winning two live performances with his I Colori Della Toscana. He got the 2nd prize at “Premio Rustichelli” 2008 in Carpi (Modena), with the music for the short film Il Signor B. Admitted at the final of the competition “Nascimbene Award 2008” with his music for Il Processo Di Verona.  He got the 2nd prize at the music competition “Mater Hominis” with his Oratorio Via Matris, in Isernia, 2009. Moreover, in the same year, Di Iorio won the scholarship to Amsterdam, where on October 6th, 2009 he conducted his Tre Bagatelle.

His composition Danza Fantasia has been recorded for the VCM Records label, recorded in the VDM Studio in Rome in September 2007, performed by the Monesis Ensemble conducted by Scogna. In this CD, called Crossroads, there are pieces by other important contemporary Italian composers.

In 2009 he got ordered works by the Italian radio-television network Sat2000, making orchestrations and arrangements of We Are The World (for Chorus and Orchestra) and O Sole Mio (for Tenor and Orchestra), both performed on May 13th, 2009 in Israel, in the live concert on the occasion of the visit by the Pope, broadcasted worldwide by Sat2000.

In December 2009 Di Iorio won the music composers competition “To Vancouver with your Music”, made by Italian TV channel SKY TV Italy, with his composition Spirito Eroico. Around twenty pieces were recorded with the Orchestra Verdi Of Milan. From February 12th, 2010 his music score was broadcasted by TV SKY in all the TV shows regarding the Winter Olympic Games in Vancouver 2010. 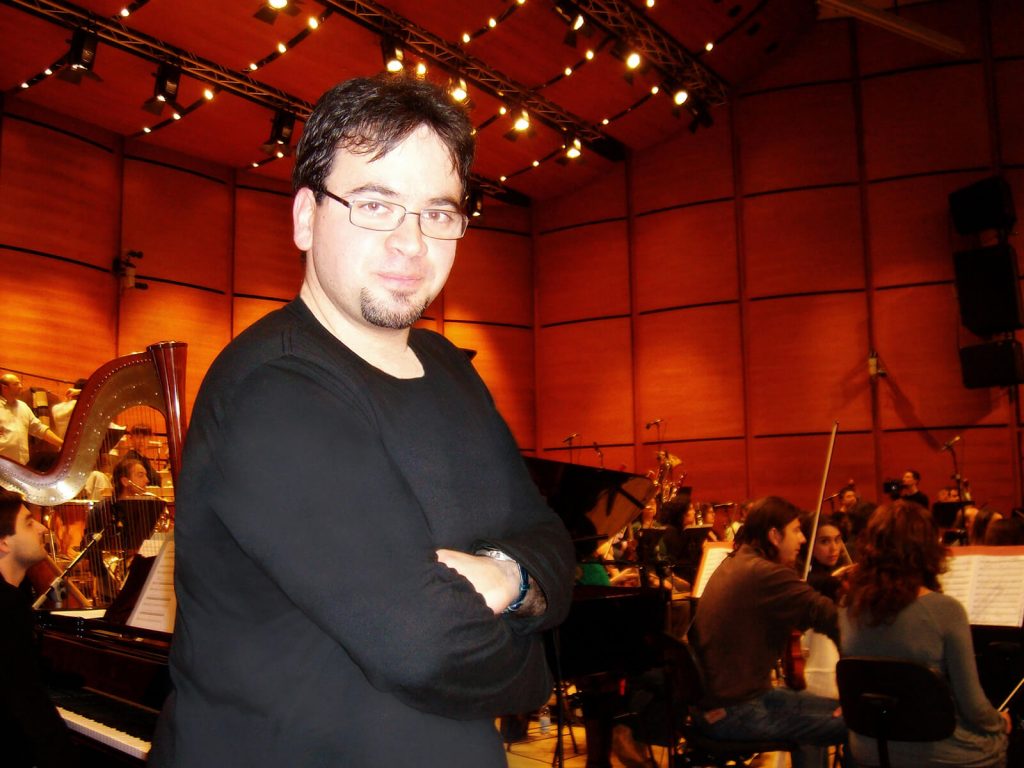 On November 29th, 2010 he won the Best Award at the International Composer Competition “Valentino Bucchi” 33rd Edition in Rome, with the composition Eja Mater for Solo Voices, Chorus and Orchestra.

From 2010 he signed an agreement with Soundfile Production, a Music Company for TV, cinema etc. in Los Angeles. Thirteen of his pieces have been selected to be used in productions for movies, TV, commercials and others in the USA.

In the same year, he arranged Playing Love from Ennio Morricone’s soundtrack “The Legend Of The Pianist On The Ocean”, recorded on CD “Duende” in Naples.

In March 2013 Di Iorio got a Nomination at the Hollywood Music In Media Awards 2013 in Los Angeles with his composition Spacecraft Escape.

In November 2013 Di Iorio went to Hollywood where he attended the grand gala of the final evening of this event, held on the 21st at The Fonda Theater. Before the ceremony began, like all self-respecting American film events, Di Iorio had the honour of parading on the Red Carpet for photographers, as did all the other nominees and special guests, including the actor Eric Roberts and other celebrities. There were over 500 candidates in all genres and musical styles, and representing Italy there were only three nominated Italian composers. The complete photos of the Red Carpet are visible on the official website of the event, on page 18.

He was engaged in 2013 by Fidelity Wave Production Music, a Musical Society for TV, cinema etc. based in Los Angeles. Twelve of his pieces have been chosen to be used in various productions for TV, movies, and more in the USA.

In 2013 he signed a contract of engagement with Italian TV Mediaset RTI, one of the major national TV. They selected eight of his compositions to be used and broadcasted in Italian TV shows, commercials, opening titles and other uses. His composition Galaxy Endeavor has been selected to be used for the TV campaign Etnaland.

On September 28th, 2013 Di Iorio got the 2nd prize at the “FMF Young Talent Award 2013” in Krakow, Poland, within the 6th “Film Music Festival”, with his composition Moon Mission for the short film Ciemna Strona Księżyca (Dark Side Of The Moon).

In September 2013 he was engaged by Laguna Films, LLC in Hollywood for composing the music for the movie Past Due! with actor Eric Roberts.

In the same period, he completed the music score for the American movie Life In Between and other projects.

On July 6th, 2014 Di Iorio performed as a composer and conductor  in Chiari (Brescia) with the mezzosoprano Marianna Petrecca in a gran gala concert conducting the Orchestra Filarmonica Franciacorta of Brescia. The concert program was composed of the most famous film music scores by composers from Hollywood and Italy, including John Williams, Ennio Morricone, Hans Zimmer, Howard Shore, as well as a few Di Iorio’s orchestral compositions like Sparks Battle, Celebrazioni and Dante In Paradisio.

After having been selected in May 2014, since July 14th he attended the ASCAP Television & Film Scoring Workshop with Richard Bellis in Hollywood.

The CD is on sale in the following stores: 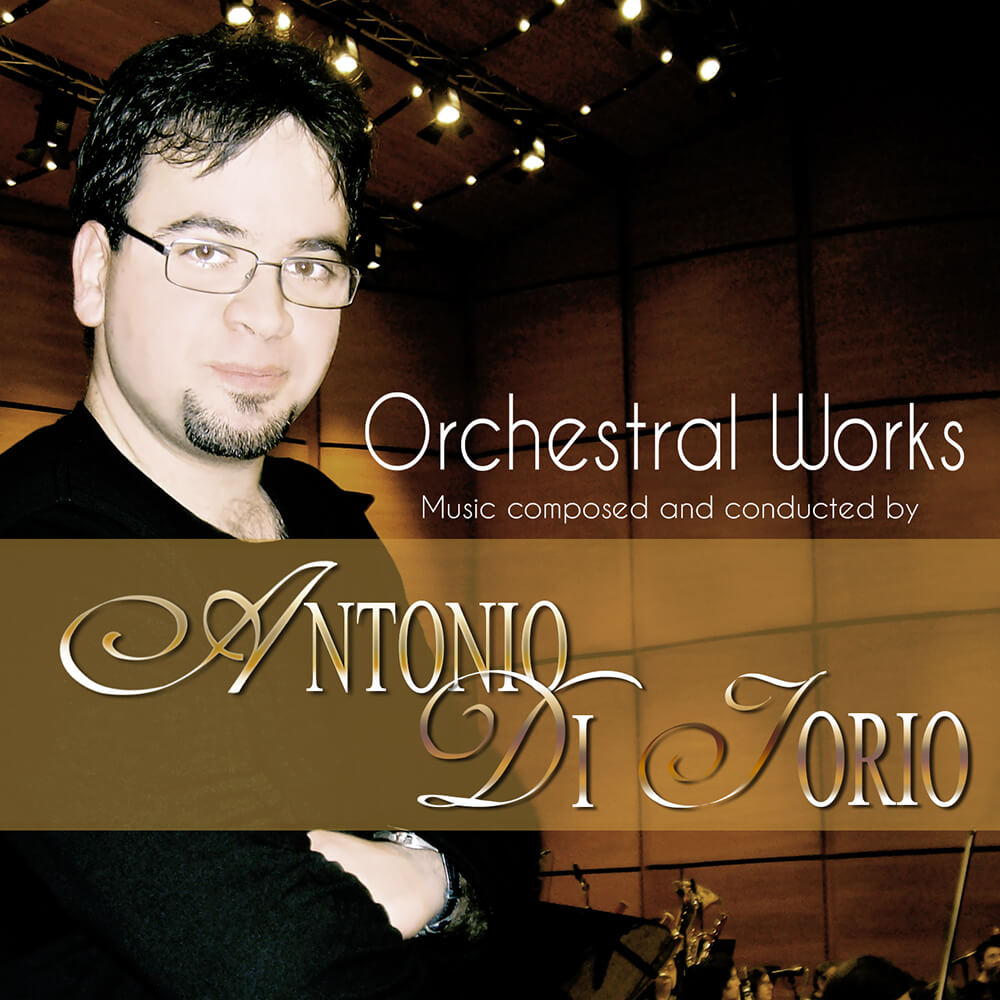 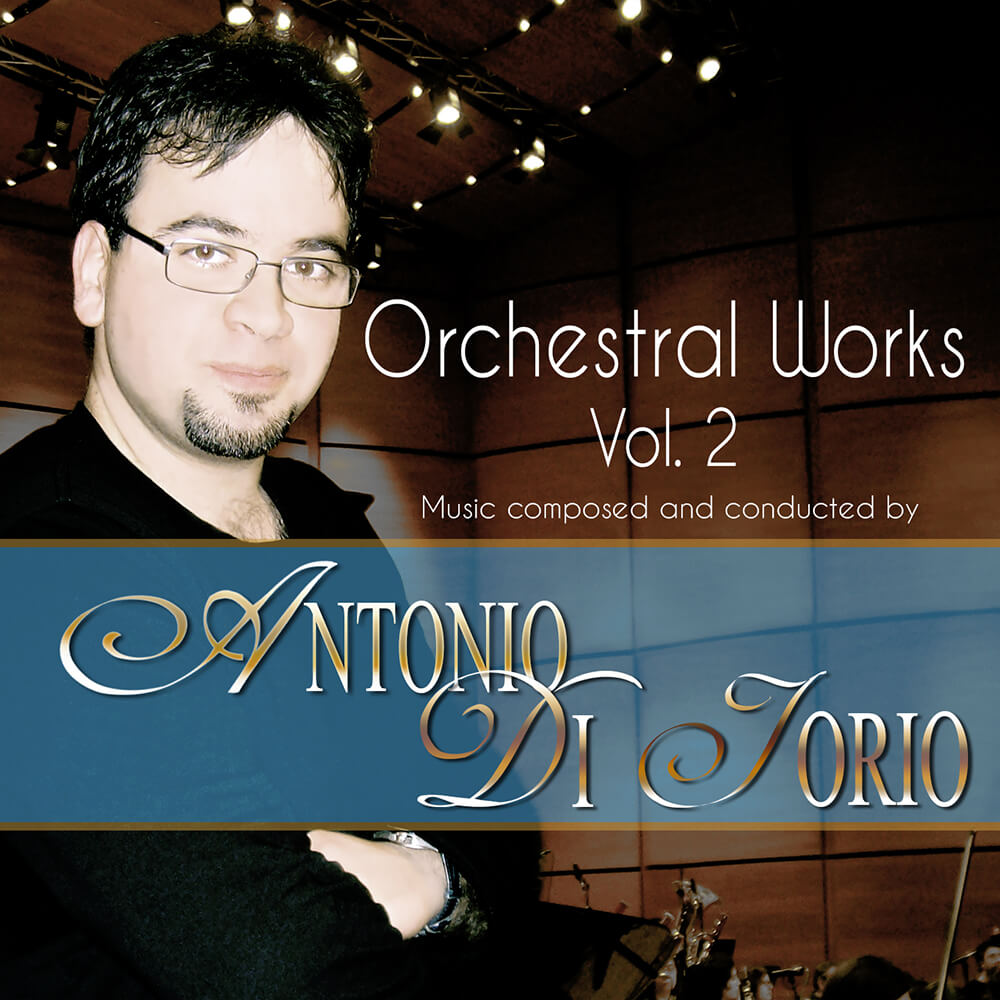 On May 30th, 2015, Di Iorio won the 1st Prize at the very prestigious Composers Competition “FMF Young Talent Awards” 2015 in Krakow, Poland during the “Film Music Festival”, with the orchestral composition Under Assault.

Di Iorio received his winning award during the International TV Series Gala at the Tauron Arena, in front of an audience of TV composers, Hollywood guests and around 12,000 viewers gathered at the concert, who heard the winning suite composed for a fragment of an episode of the cult series “The Borgias”. Performance by La Sinfonietta Orchestra (100 musicians) conducted by Diego Navarro.

The award was presented by Izabela Helbin, director of the Krakow Festival Office, and Robert Piaskowski, FMF artistic director.

The news and the article regarding the winning can be read on the Official Web-Site of the Event of the Film Music Festival.